THE LEGEND OF BLACK ORCHARD 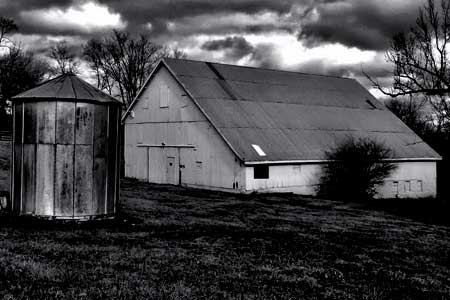 Shelbyville, Kentucky, November 1, 2015, 3:15 AM: Shelbyville police arrive at the Black family pig farm and slaughterhouse in rural Shelbyville responding to complaints of loud screaming, gunshots and a wood chipper running in the middle of the night. The Black Orchard Farm was owned by Silas Black and co-run by his two brothers, Jonas and Emmett. Their elderly mother, Ethyl Black, also lived on the property according to records released by the Social Security Administration.

Knocking on the farmhouse door, the Shelbyville police received no response. Alerted by a noxious smell coming from inside the residence, law enforcement broke down the front door and discovered a ghastly scene. The front parlor was nearly impassable, cluttered with stacks upon stacks of old newspapers and tabloid magazines. Piles of dirty laundry, empty pizza boxes and plates of rotting food littered the floors. When officers reached the dining room they discovered six corpses seated properly around the dinner table, skeletal hands clasped together as if eternally saying grace before a meal. Flies buzzed among the bodies and several wasps nests had formed in the attic, making the initial investigation difficult.

Further search of the house uncovered dozens of women’s purses, driver’s licenses, car keys and personal belongings. Preserved human organs, fingers and other body parts were found in mason jars in the kitchen refrigerator. No member of the Black family has since been located. 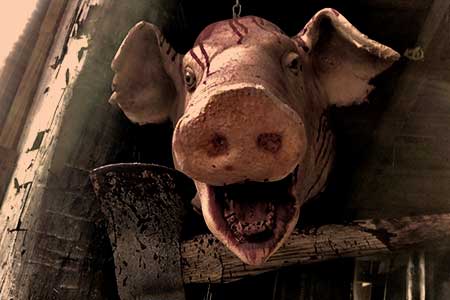 The investigation continued to the Black Orchard barn and slaughterhouse, where crime scene evidence points to the gruesome conclusion that Silas Black and his family members were feeding their victims to their stock of hogs as a means of disposing of the bodies. Numerous Missing Persons reports have been allegedly linked to Black Orchard Farm, but no exact count of victims has been released. Leaked FBI documents indicate that there was a secret room discovered inside the barn, but the pages detailing what was found there have been marked CLASSIFIED. What happened inside that hidden chamber remains a mystery.

Silas Black and his family members remain on the FBI’s MOST WANTED list, and the land currently sits vacant and abandoned. The nagging questions regarding what actually happened in that barn still haunt many native residents. Rumors persist that one day Black and his demented family will return to Black Orchard either to collect something they left behind in that secret room inside the barn or to continue the legacy of human slaughter they began there.

This fall, visit Black Orchard and discover WHAT'S IN THE BARN!

Warning! Event may be too intense for young children and is not recommended for children under the age of 12

Check Out These Other Louisville Halloween Haunted Attractions!